New XenDesktop 4 Licensing Model: Flexibility? Yes, but at what Cost?

It seems the Citrix community had only had one topic recently, albeit one discussed hotly: licensing. Now that Citrix has given in and practically allowed all conceivable license types, everybody is happy?! It seems so, although CCU licenses have doubled in price, as Shawn Bass points out. But is this really the happy ending of a short but wild story? Maybe, maybe not. Let me explain.

Shawn Bass writes in his article, “it’ll be interesting to see how these licenses get deployed, allocated, revoked and troubleshot”. There is much truth in that. The new flexibility comes at a cost, and in two different areas.

Citrix licensing used to be fairly simple (and simply fair, though not cheap). One license for each user while accessing the system. No license for inactive users not using the system. Now customers have to choose between per user, per device, campus-wide and VDI edition. Although choice is great, clarity and simplicity are not bad either. That brings me to my first point: Who wants Citrix licensing to be as complex as Microsoft licensing, where only select few specialists fully understand it, even at Microsoft!?

But not only customers may suffer from the new flexibility: there is a technical side to licensing, too, at least if it is enforced. If what I have been told is true, the current version of XenDesktop 4 has no licensing enforcement built in. Good for customers, but managers do not appreciate such a state of “uncertainty”. That makes it likely that enforcement will come in a future version of XenDesktop. But how to do it? I can only guess if the current architecture of licensing server can cope with the changes that come with XenDesktop 4. Maybe it can, but it will not be simple to code all these options. And then there is offline usage on the horizon. How do you take a CCU license offline? If you remove it from the CCU pool and assign it to the user or device going offline, it is not a CCU license any more, but gets transformed into a user/device license. So here is my second point: As Shawn indicated, license enforcement requires software for a large number of processes, from purchase to tracking to upgrading. This software needs to be written and maintained, all the while rather becoming (hopefully) than remaining user-friendly. This has not become easier with the recent changes.

And here is a third point disguised as a question: Microsoft has had no enforcement of per-user terminal server CALs since Server 2003 – did it hurt them financially?

Udamin.exe is a handy tool for managing Citrix user/device licenses. To get a list of currently issued licenses run it like this: C:\Program Files\Citrix\Licensing\LS>udadmin.exe -list Usage data is 15 minutes […]

Getting USB Smart Card Readers to Work with Citrix XenDesktop 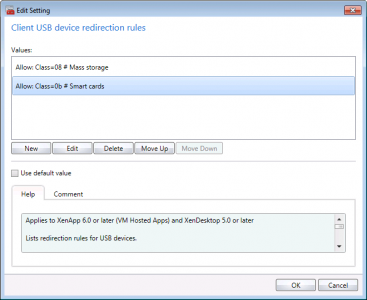 Even if you only have a moderately sized VDI deployment chances are high you will face the problem of getting USB smart card readers to work on the virtual desktops. […]

What would Joe, a Citrix admin, put on his Christmas wish list? Here are some guesses in no special order.