Solution to “Windows Cannot be Installed to this Disk”

I encountered a strange error when I moved my laptop’s hard drive to another computer to make room for an SSD. When I tried to install Windows 8 on the repurposed drive I could not see any partitions. Neither could I install Windows on the drive. I kept getting the error Windows cannot be installed to this disk. In addition, the setup process was extremely slow.

I first thought this was because I had encrypted the drive with BitLocker. I could not think of a reason why this should cause the error and a web search was not fruitful either.

Then I suspected UEFI – I had moved the drive to a computer with the BIOS in UEFI mode. For that, a GPT (GUID partition table) is required. If the disk was previously used in a computer with the BIOS in legacy mode, its partitioning would be MBR. This was the case, so with Nicholas Dille’s instructions I pressed SHIFT+F10 during setup and issued the following commands:

That last command failed, however, with an I/O error. That never sounds good.

It took a while, but I finally remembered that I had set an ATA password on the disk. My laptop’s BIOS has the capabilities to manage ATA passwords, but not every computer does. The Sony laptop I had fitted the drive into has very “simple” BIOS that does not offer many options. It did not know about ATA passwords, so it ignored that and presented the still protected drive to Windows setup, which of course assumes that a drive is unprotected and therefore fails miserably.

Once I had identified the problem the solution was clear: I refitted the drive into the Lenovo laptop, cleared the ATA password, put it back into the Sony and Windows installed without a glitch. 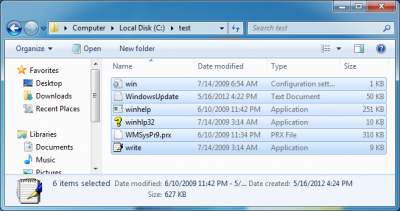 I had a very interesting case recently where copied EXE files could not be deleted. They would simply remain in the folder like zombies, only to disappear a few minutes […]

When was the last time you got that not too friendly message stating that your password has expired and asking you to change it? Probably only a few weeks ago, […]