After neglecting my good old Canon EOS 350D for some time, I took some pictures with it yesterday, which I wanted to transfer to my laptop, of course. And there the trouble started.

My instinctive action (remove the memory card and insert it into the laptop’s card reader) did not work. I remembered that Canon sticks to the compact flash format for some reason, for which no laptop know to man has a built-in reader.

OK, second try: connect the camera via USB (luckily it has a standard micro USB socket). I still knew that the EOS 350D does not present its data via a simple Windows drive letter (that would probably be too easy). No, you have to install a driver from Canon . So I waited while Windows 7 contacted Windows Updated, only to report that no driver was available. Hmpf!

Then I visited Canon’s German driver site, found no driver for Windows 7 (who would have thought otherwise, by now?) but decided to try my luck with the Vista driver. Downloaded it, ran the installer, but it reported it did not support my Windows version. Thinking I could still outsmart the thing I activated the Vista compatibility mode for the installer, but still no luck.

Then it struck me: I am using the 64-bit version of Windows 7. I went to Canon’s driver site again only to find that they do not have a single 64-bit driver! Where are those guys living, or better: when? Last millenium?

With my hopes down, I turned to Google as a last resort, not expecting much. How mistaken I had been! The very first hit pointed to the forums at vistax64.com, where a very simple solution was offered:

Change the camera’s USB connection mode from “PC” to “Print/PTP”.

While this sounds illogical, it works like a charm. Windows 7 instantly recognized the device and I had no problem whatsoever copying my images over.

This is the fourth part of a mini-series on Windows x64, focusing on behind the scene changes in the operating system. In the last article I wrote about the changes […]

Windows 7 comes with several features that promise to greatly improve file access over a WAN. One of them is version 2 of the SMB protocol, another transparent caching. This […] 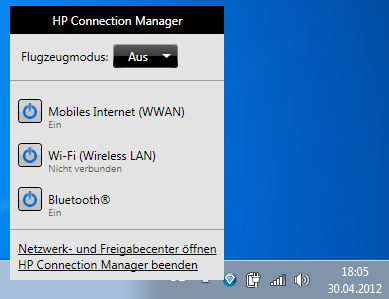 Configuring an HP Elitebook with integrated HS2340 mobile broadband module to use the 3G connection can be a little tricky. Here is how it works – without third-party dialer software!