Which Software Installed That Driver – And When?

Installing a software that includes a driver may leave your system in an inconsistent state. If the install fails, parts may remain on the system. And if the remaining part is a driver, I get nervous – drivers are not the kind of stuff I want to have lingering around my system’s memory. Here is a way of identifying when a driver actually got installed.

In my case, I installed, or rather tried to install, the Citrix Access Gateway (CAG) Plugin 4.6.2, a VPN client, on Windows 7 x64. That failed – the installer reported a timeout after a couple of minutes of showing a progress bar. I aborted the install, which worked, but when I rebooted the machine, it hung on shutting down. Not good.

After a reset I examined the system: nothing related to the CAG client, but in the properties of my network card I found something suspicious called “Deterministic Network Enhancer”: But how to know whether it came from the (partly failed) install or from something entirely else? First thought: Check the timestamp of the driver file. By searching the registry, I found the driver’s entries:

To my disappointment the driver file’s dates (dne64x.sys) revealed nothing. I did not install anything in 2008 – I run Windows 7… Then I had the idea of checking the registry. Each driver has a key under HKEY_LOCAL_MACHINE\SYSTEM\CurrentControlSet\services. And each registry key has a timestamp that gets updated whenever the key itself or a direct sub-object of the key get changed. So I only had to get the timestamp of the key HKEY_LOCAL_MACHINE\SYSTEM\CurrentControlSet\services\DNE in order to know when that driver had been installed.

But… although I run the seventh incarnation of Windows its registry editor has not changed much for at least a decade. Regedit.exe has many shortcomings, one of them being that it does not show timestamps for registry keys. Luckily, other programmers are more than happy to fill the void. I found the interesting tool Registry Commander – one of its capabilities is to show registry key timestamps. It looks like this: 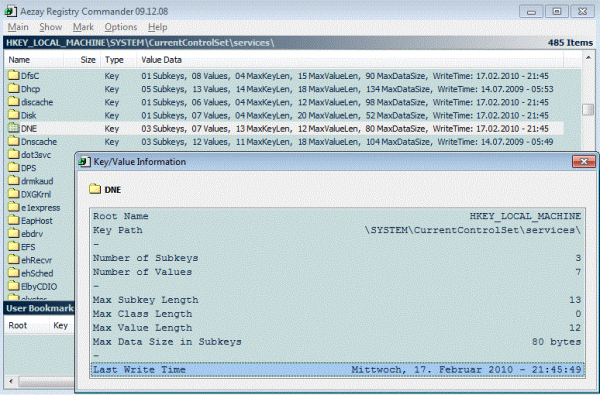 And that was the answer I sought. The DNE driver was indeed installed by the CAG client. Now I can safely disable or uninstall that driver.

What about you? Have you used any alternative registry editors? Do you prefer them over Regedit? Access Based Enumeration (ABE) is a well-hidden feature even in Windows Server, where it can be configured per share, but only in the Share and Storage Management MMC and not […]

Why can you start Mozilla Firefox by typing “firefox” in the Run dialog and press enter? Firefox.exe is not located in any directory in the path. The same with Outlook […]

How to Modify Default Share Permissions and Other Tweaks

NTFS permissions are stored in the file system, that is well known. But where are share permissions stored? As so often with Windows: in the registry. Network shares are defined […]