I have been watching streaming video for a very long time. It always worked beautifully, in high resolutions and from any site: YouTube, Netflix, Amazon Prime Video, you name it. Then suddenly I started to notice lip sync issues, probably around autumn/winter 2016. The longer a video played, the more the audio would get out of sync with the video, making watching and listening increasingly awkward. Recently I finally found the time to analyze these audio/video sync problems. Read on for a playback troubleshooting methodology followed by a workaround for the issue at hand. 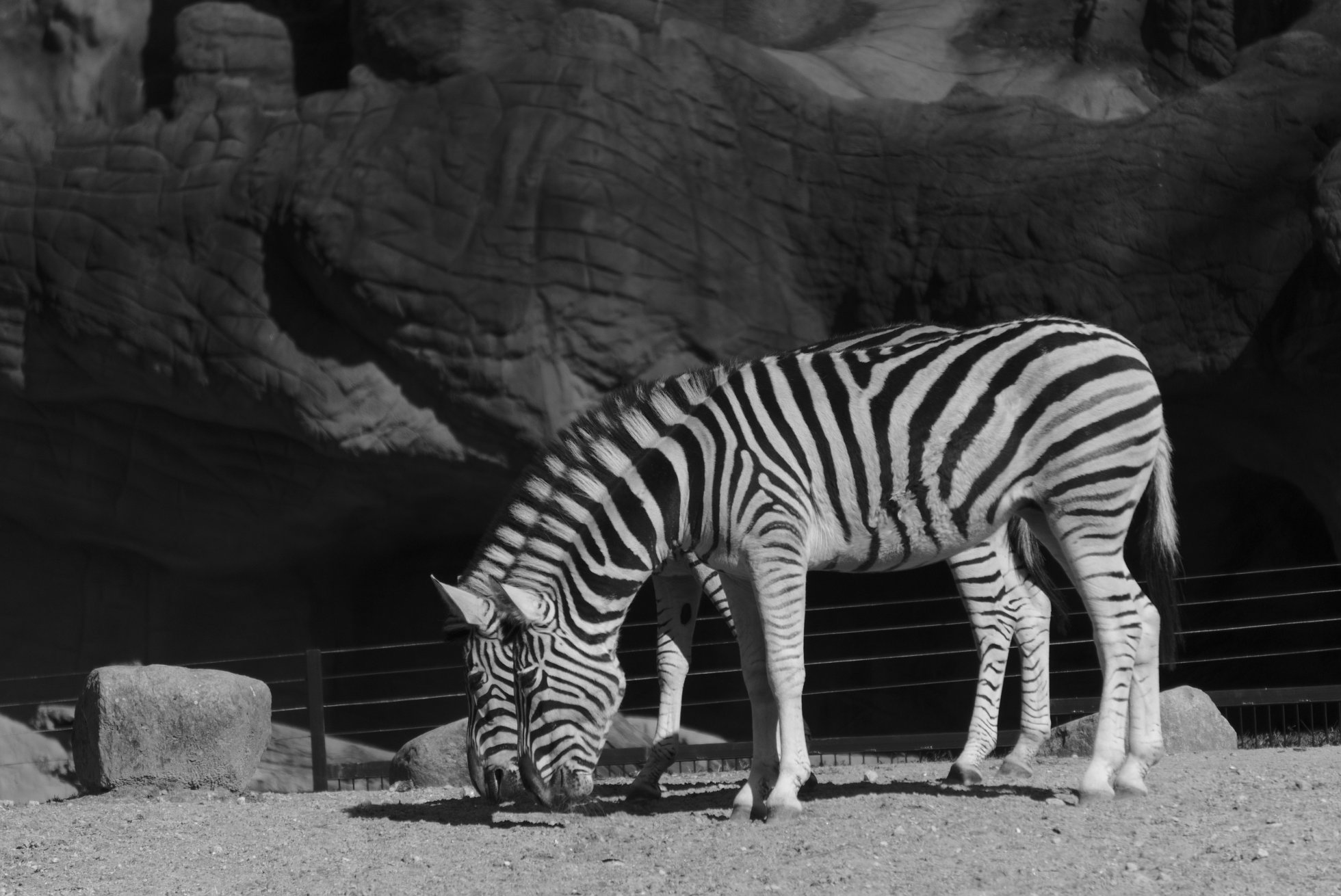 In sync by Jochen Spieker under CC

Start at the source and work your way towards the affected device or software.

As mentioned above the issue happened with all the video streaming services I tested: Amazon Prime Video, Netflix, and YouTube. However, not all of these services were affected in the same way. In other words, the rate at which the audio diverged from the video varied between services. One aspect was always the same, though: the audio would precede the video.

Amazon Prime Video was affected the most. After only about 10 minutes of playback, the audio was far enough ahead of the video that the delay was easily noticeable and quite annoying. The sound of a door closing would be heard while the door was still visibly open, and when people were talking their lip movements did not match the words coming out of their mouths at all.

Given that multiple streaming services were affected, the root cause could not have been with any single service. So I moved on in my analysis.

I have a pretty fast internet connection with a provider not known for traffic shaping/throttling of any kind. Also, playing streaming video on our iPad never showed any issues. Finally, I used our user-experience monitoring product uberAgent to analyze my network connections for signs of trouble, e.g. high latency, reconnects or retransmits. There were none.

As a next step, I considered my local network, albeit only briefly. Most of the previous paragraph’s points apply here, too. On top of that, the issues happened not only over Wi-Fi connections, but also when an ethernet cable was plugged in.

When something is not working as expected in one browser the first reaction is typically to try another one. That is what I did, too, only to find that this audio/video sync issue was occurring in all (major) browsers. I tested the latest versions of Chrome, Firefox, Internet Explorer, and Edge. I also tested the Netflix Windows app. They were all affected in the same way.

While I tried to reproduce the issue on multiple computers I noticed a pattern: the affected devices were all running Windows 10 version 1607 and had a Realtek High Definition Audio device. The one machine still running the earlier Windows 10 version 1511 was working correctly, as was a tablet running 1607, but equipped with an Intel SST Audio Device instead of the ubiquitous Realtek audio.

Focusing on the audio I experimented with various configuration changes, starting with Windows’ diagnostics troubleshooting wizard find and fix audio playback problems. It performs some useful tests and makes suggestions for changes like the following:

Since those did not help I tried suggestions found on the internet (some of which are of very dubious value):

Of course, I also updated the (Realtek) audio driver to the latest version. Nothing made the asynchronicity go away.

Then I had an idea when I noticed that a wireless headset I am using for web meetings shows up as a playback device: 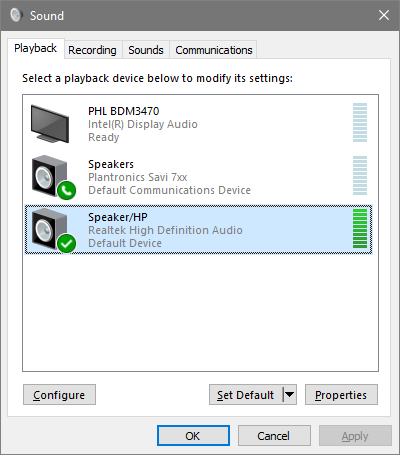 By configuring my Plantronics headset as default device I routed all audio output to the headset. Its embedded audio chip now provided all the functionality while the machine’s built-in Realtek audio was ignored. And bingo – the delay was gone!

I tried with another headset, a different model but also with built-in driverless USB audio. It also worked correctly, on both computers where I had experienced the sync problems before.

As only Realtek audio devices seem to be affected a workaround/solution requires a secondary audio device which is used in place of the built-in audio. A quick search showed that external USB audio devices are cheap and easily available. Apparently, they are standardized in the USB specifications so that all relevant operating systems support them without requiring additional drivers.

I ordered the Ugreen USB external sound adaptor for 7.99 € – to verify my hypothesis, but also to be able to enjoy a movie again. 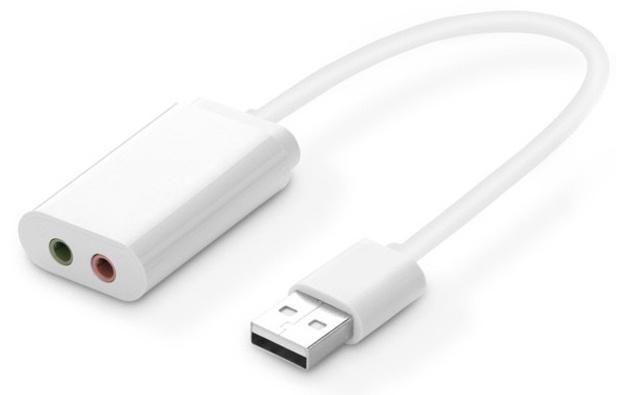 Setup is more than simple: plug the USB end into your computer and your headphones into the 3.5 mm jack. Then bring up the Sound dialog and make the new device the default.

That fixed the audio/video delays for me – for the time being. 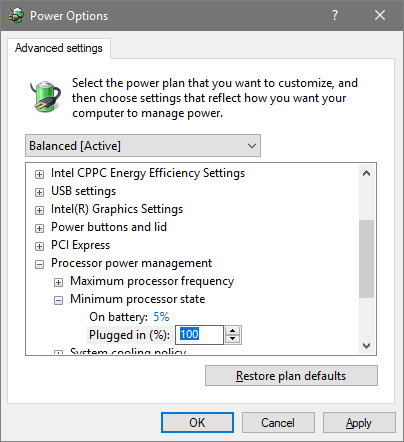 While this works and is easy to change it is but a workaround, not a solution. Increasing the minimum processor state value prevents the CPU from lowering the frequency when there is not much to do. This reduces battery life and overall power efficiency.

If your issue is about lost/dropped frames you might find the following helpful. In this kind of scenario, playback may freeze from time to time (when frames are dropped) while the player tries to catch up and get going again.

I noticed audio-video issues on a quite different machine, too, a PC I had built myself. To my dismay, the two workarounds above did not help. Neither switching to a USB audio device nor bumping the minimum processor state value to 100% made the occasional freezes go away. After some testing, I found that disabling the BIOS setting ErP Ready solves the problems.

Additional testing on that system before I found the solution: disabling VT-d and Intel Virtualization in the BIOS did not help. The freezes occured with Microsoft’s default High Definition Audio Device driver from Windows Update as well as with Realtek’s driver. The machine’s specifications:

Windows 10 1703 (Creators Update) does not fix the audio/video sync issues described in this article.

Having used Windows 10 1709 (Fall Creators Update) for a while it seems somewhat safe to say that the audio/video sync issues are now fixed – at least on my devices. Please let us know in the comments if this is true for your machines, too. 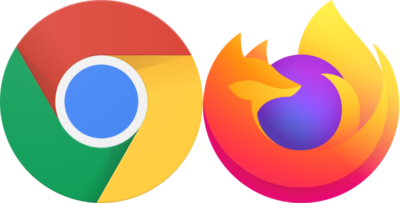 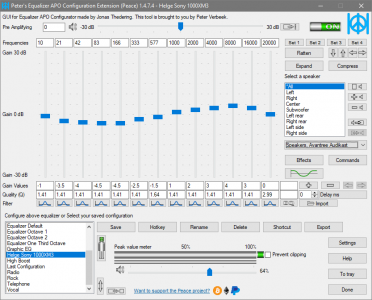