If you create a C++ project in Visual Studio and configure it to “Use MFC in a Shared DLL” (the default) you need to make sure the C runtime (CRT) and the MFC libraries are installed in the correct versions on the end user’s computer. That can be difficult.

There are three ways to install the libraries on target computers. In this article I focus on the “private assembly” method where the libraries are stored in your application’s directory. Some of its advantages are that you can run the program from any location, even a network share, without installing parts of it to the user’s SxS folder first. And you need not worry about calling VC_Redist from your setup.

What you do is simple:

Locate the appropriate folders in C:\Program Files (x86)\Microsoft Visual Studio 9.0\VC\redist\x86\ (or AMD64 if you build a 64-bit version). In many cases, when using the runtime and MFC you need Microsoft.VC90.CRT and Microsoft.VC90.MFC. Copy these folders to you application’s binary folder, for example:

Your executable’s manifest (incorporated into your EXE file as a resource) lists the versions of the runtime libraries it requires. The versions listed in the manifest are the initial versions installed on your development machine, though. In the case of Visual Studio 2008 these are the versions of the pre-SP1 libraries. Once you install Service Pack 1 you get the newer libraries in the folder C:\Program Files (x86)\Microsoft Visual Studio 9.0\VC\redist\x86, but the manifest in your own binary still demands the original library versions.

That does not work. In fact, it crashes your application when run on a “clean” system.

What you need to do is tell the compiler you want to depend on the newest versions of the libraries. You do that by including the following lines at the very top of Stdafx.h of every binary:

or, a combination of all these:

You may wonder what happens if you happily install the most current libraries on your users’s computers and, some time later, an updated version is released by Microsoft. Will your application continue to use the then old and insecure version? Good question!

If a new version of the runtime library is pushed down via Windows Update and installed to %Windir%\WinSxS, not only are the library binaries and their manifest updated, but also a policy file is installed that basically tells the loader to use the new version instead of the old version. See this example (from %Windir%\WinSxS\Manifests\x86_policy.9.0.microsoft.vc90.mfc_1fc8b3b9a1e18e3b_9.0.30729.1_none_7dd1e0ebd6590e0b.manifest):

For the sake of completeness here is simplest form of the assembly search sequence:

And for those who still question the use of private assemblies: here is a list of products installed on my system that use them:

Addendum: Application Crashes at Startup Because MSVCR90.DLL is Not Found

Some time after implementing the solution described in this article for a medium-sized project I was made aware of a strange problem: on some machines the application crashes while loading before even being able to display any messages.

The usual debugging tools sxstrace and fuslogvw (Fusion log viewer) did not show anything useful, but Dependency Walker was helpful. It pointed out the problem right away: 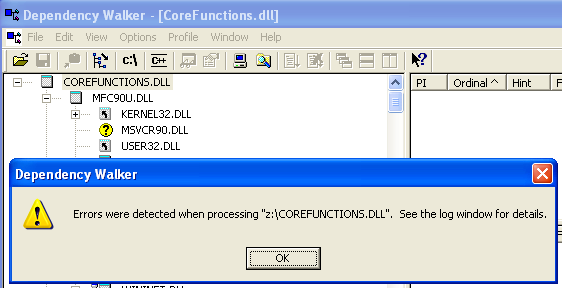 Note: CoreFunctions.dll is one of the DLLs of our product. It is dependent on the Visual C runtime files (including msvcr90.dll) and msvcr90.dll is located in the subfolder Microsoft.VC90.CRT as described in this article. But still, msvcr90.dll is not found by the OS loader.

After some research I found out that this happens both on XP (SP3) and Vista (SP2) if and only if the application is started from a mapped network drive. Copying the application’s folder to the local hard drive makes the problem go away. Another way to fix this is to put the VC runtime libraries directly into the application folder, not in the subdirectory Microsoft.VC90.CRT.

Addendum 2: Application Crashes at Startup Because of Conflicts in the Manifest

A year after writing this article we had a case where our application failed to start and the following event was logged in the application log:

As it turned out this message is logged if there are conflicting entries in the manifest. The easiest way to check is to open the component causing the error, CoreFunctions.dll in this case, in a text editor and scroll to the bottom where the manifest is stored: 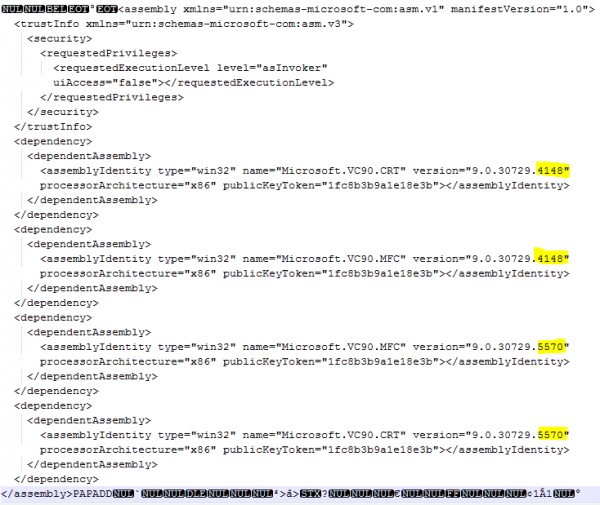 Interestingly, this happened only on one developer’s machine. Checking out a fresh copy of the solution from version control resolved the issue, as did deleting the autogenereated solution files, like .suo or the Release directory. Unfortunately we did not find out what really caused this.

Previous Article .NET Applications on Windows x64 - Easy? Yes and No
Next Article Poll: Do Companies Use Local or Roaming Profiles for Desktop PCs?

This is a quick and dirty description of how to use radio buttons in MFC, written because I could not find this information in a single place on the web. […]

Finding good information on how to enable drag and drop for MFC applications is hard enough (why?). But just when you think you should have it working, you hit a […]

Let’s assume you have a C# project in Visual Studio. In that project, you reference an assembly (DLL) created by another of your projects. Because both projects are in active […]

If you get weird errors in Visual Studio that basically state files like Windows.h cannot be found, the reason may be a missing or incorrect WindowsSdkDir variable. In my case, […]