Which Version of Citrix GoToMeeting Are You Running?

Last updated: 2017-01-21. This article still applies to the latest versions of GoToMeeting. The high disk space usage has not been solved yet.

When hovering over the GoToMeeting icon in the taskbar it tells me I am running version 6.3.1:

When I check in Programs and Features I appear to have version 6.4.4. installed:

Clicking that link opens a webpage listing 6.4.3 as the latest version: 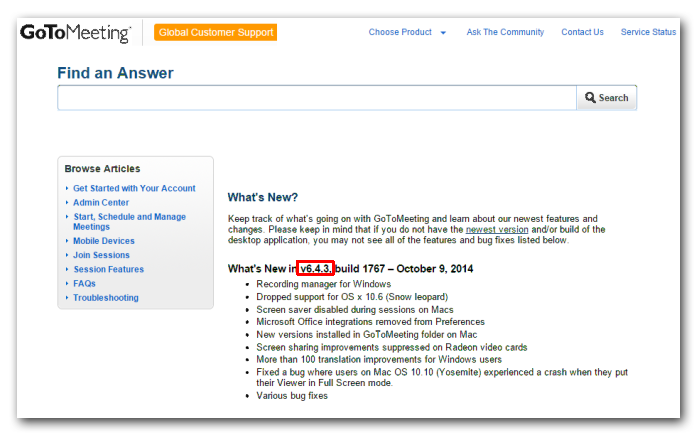 This is more difficult than expected.

I start GoToMeeting through this start menu link:

It points to an executable in the folder C:\Users\helge\AppData\Local\Citrix\GoToMeeting\1468.

Taking a look at the parent of that directory reveals that there seem to be many different versions of GoToMeeting on my disk, each taking up around 29 MB, totaling 290 MB (on a machine installed just a few months ago!): 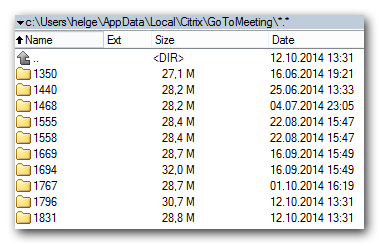 Most of the confusion seems to come from two flaws in GoToMeeting’s installer:

I “upgraded” GoToMeeting to the latest version by changing the directory the start menu link pointed to to the one with the largest number (1831). Then I deleted all the other subdirectories of C:\Users\helge\AppData\Local\Citrix\GoToMeeting. That had the nice side-effect of freeing about 260 MB on my hard disk (and from my user profile).

More than two years after I initially posted this article I took another look at GoToMeeting’s disk space usage. I did this on a different machine, installed in June 2016. Although I had not used GoToMeeting a lot on that machine, I found that the situation has not improved at all. As before the version displayed in Programs and Features (5922) is different to the version that is linked to from the Start Menu (5808).

Reclaiming disk space was the obvious thing to do. By deleting all but the latest two directories I got back 761 MB. It is quite sad, however, that this has to be done manually, and that things have not improved a bit since 2014.

VMware Horizon in a Lab: Getting Rid of SSL Errors

This is a description of a quick and dirty way to get SSL to work correctly in a VMware Horizon View installation in a lab environment. Do not do this […]

Citrix Synergy 2016 Call for Topics: Get Rid of the Video Requirement (Open Letter)

It smacks of lazy reviewers looking for eye-candy. Simon Crosby, former Citrix CTO Citrix Synergy Team, I am writing to you as a guy who has presented many times at […]