During the research for my session about the XenApp 7.6 logon process, to be presented at Citrix Synergy and BriForum London, I noticed that the logon to my XenApp 7.6 lab server was taking a bit long. Longer, in fact, than the combined durations of the main logon phases user profile loading, group policy processing, logon script execution and shell startup. Much longer. Also much longer than on an otherwise similar XenApp 6.5 machine.

After the user profile has been loaded and group policy has been processed, which are both finished after three seconds, nothing happens for about ten seconds. Finally, at 13 seconds into the login is the Userinit process started which ultimately loads the shell, Explorer.exe. During most of that time the end user is presented with a black screen, getting no feedback as to what might or might not be happening as you can see in this video:

I experiemented a lot trying to find the root cause of the prolonged black screen phase, disabling all kinds of redirection, printer mapping, even IPv6. None of that fundamentally changed the duration of the black screen phase. Then I had the idea to log in via RDP (for which you have to make the user a member of the group Direct Access Users on the XenApp machine):

Now, that is a lot faster! RDP logons are finished in less than 4 seconds compared to around 14 seconds for ICA logons.

Digging around some more I stumbled upon CTX135782 which suggests setting the following registry value:

The effect was immediate, bringing the ICA logon from 14 seconds down to around 5.

Not quite. With DisableStatus set to 1, every time I logged on the LogonUI.exe process crashed due to a fault in the module CtxWinlogonProv.dll. Events like the following were logged:

CtxWinlogonProv.dll, also called CitrixRemoteLogonFilter, is registered as a credential provider filter via the registry key HKEY_LOCAL_MACHINE\SOFTWARE\Microsoft\Windows\CurrentVersion\Authentication\Credential Provider Filters\{3571A91D-713C-427c-AA0C-BBF4F618A819}. When that key is renamed or deleted LogonUI.exe does not try to load CtxWinlogonProv.dll and consequently does not crash any more while logons are still fast.

However, since I do not know what the consequences of disabling the registration of CtxWinlogonProv.dll are I cannot really recommend that approach. Ultimately Citrix are the only ones who can truly fix this.

Shortly after the initial publication of this article Shane Kleinert pointed me to limited release hotfix ICATS760WX64009 (CTX142036) which seems to be available for server OS (i.e. XenApp) only. As he explains in the comments below Shane had noticed similar issues at customer sites and found CTX142036 in spite of the more than vague problem description.

I am happy to report that CTX142036 fixed this long black screen phase issue on my machines, too. So this story does have a happy end, after all!

Is my App Running on Citrix XenDesktop/XenApp? 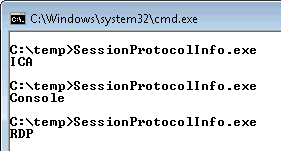 How do you programmatically determine if an application is running in a session accessed over a remoting protocol (i.e. ICA aka HDX or RDP)? It may be Citrix’ strategy to […]

I had to troubleshoot a case where it suddenly was not possible any more to connect via ICA/HDX to freshly installed Windows 7 VDI machines. As it turned out, the […] 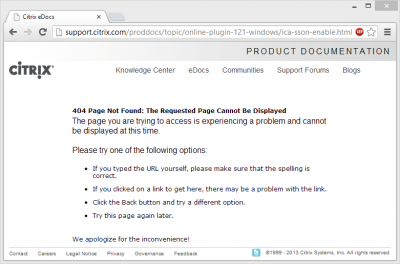 Know this problem? You try to start a XenDesktop session, Desktop Viewer opens … and closes. Then nothing.

Have you ever tried to log on to a terminal server and, after entering your credentials, been forced to stare at a grey screen for a lengthy period of time […]